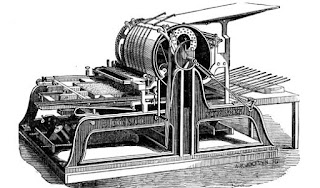 The history of printing goes back to the duplication of images by means of stamps in very early times. The use of round seals for rolling an impression into clay tablets goes back to early Mesopotamian civilization before 3000 BCE, where they are the most common works of art to survive, and feature complex and beautiful images. In both China and Egypt, the use of small stamps for seals preceded the use of larger blocks.
In China, India and Europe, the printing of cloth certainly preceded the printing of paper or papyrus. The process is essentially the same – in Europe special presentation impressions of prints were often printed on silk until the seventeenth century.

The earliest documented evidence of printing dates back to the 2nd century when the ancient Chinese started using wooden blocks to transfer images of flowers on silk. Around the 4th century, woodblock printing on cloth was practiced in Roman Egypt. The Chinese began printing on paper in the 7th century, and they created the Diamond Sutra, the first complete printed book, in 868. The first movable type printing system was invented by Pi Sheng in China around 1040. This printing device used movable metal type pieces to produce prints, and it made the process of printing more efficient and flexible. Nonetheless, since it was made of clay, it broke easily. In the 13thcentury, the Koreans created a metal type movable printing device, which applied the typecasting method that was used in coin casting. 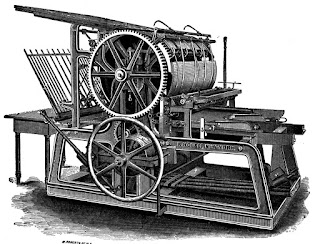 The key figure in the history of printing is Johann Gutenberg (1400 – 1468) of Mainz, Germany. He was a silversmith by profession. Around 1430-40 he invented movable, interchangeable, re-usable type, for printing on wooden press (adopted from wine or cheese using a printing ink of a composition invented by him. It was an oily, varnish-like ink made of soot, turpentine, and walnut oil. 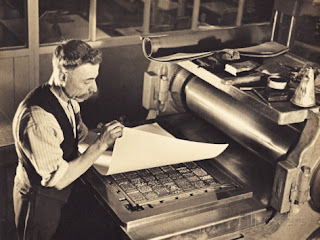 His business was backed by a man called Fust (or Faust) and he had an assistant Peter Scha – the print shop probably had around 25 staff and aimed to print around six pages of a book per day. His masterpiece is the Bible printed in 1453-4 , 180 copies were made, each of 1282 pages with 42 lines in two columns. They were designed to be completed by colouring main capitals etc by hand. 48 copies are known to exist now ( a very fine copy is held in the John Rylands Library in Manchester).
Gutenberg’s actual technique of making movable type remains unclear; he was familiar with the craft of casting metal from a reverse impression. He may have made castings from sand or plaster, but we probably shall never know for certain. However we know that a few years after his death the process used involved the production of a metal punch, the end of which would have been cut to produce a reverse impression of the type.
His invention of the printing press is widely thought of as the origin of mass communication– it marked Western culture’s first viable method of disseminating ideas and information from a single source to a large and far-ranging audience. A closer look at the history of print, however, shows that the invention of the printing press depended on a confluence of both cultural and technological forces that had been unfolding for several centuries.

Print culture and technology also needed to go through centuries of change after Gutenberg’s time before the “massification” of audiences could fully crystallize.

Courtesy:
https://en.wikipedia.org
www.bpsnet.org.uk/history_print.htm
http://www.overnightprints.com/history_of_printing
http://karmak.org/archive/2002/08/history_of_print.html
Photostop is into fine art printing. It is the one stop destination for the best Canvas & Fine art prints. Photostop is the preferred partner for many Professional photographers, Photography enthusiasts & even painters and artists who approach us with their finest of works and get it printed on our special media’s. The archival media’s which we use are long lasting and gives your print a life span of more than 50 years.
For more details visit www .photostop.in or Contact Us @ 9845128760
Post Views: 2,594